The market for smart speakers, also commonly referred to as voice-enabled smart speakers and virtual personal assistant (VPA)-enabled wireless speakers, is still a very nascent market. Yes, the market has enjoyed tremendous growth, especially over the last six months, but there is still significant growth yet to be had. 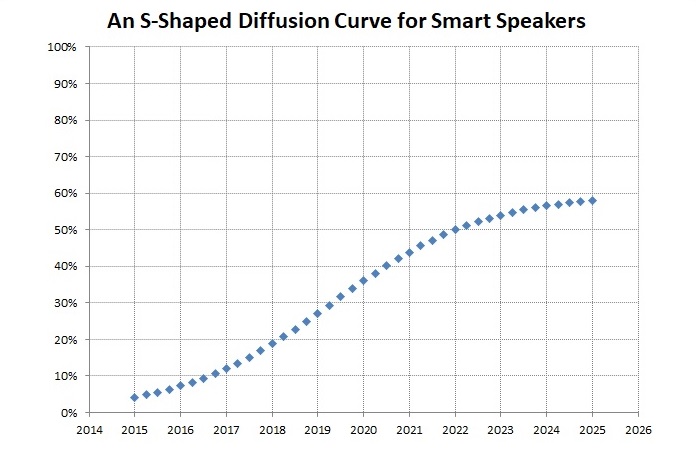 I’m already beginning to see some analysts suggest we are close to peak adoption/sales and that annual sale volume will begin to decline as soon as 2020. I created a very quick household adoption model for smart speakers to illustrate why this is dead wrong.

I’ve modeled a simple s-shaped diffusion curve for smart speakers. You can see we are still in the early phase of adoption. My model makes some simple assumptions:

We can change any of these assumptions without fundamentally changing the outcome. The reality of the smart speaker market is probably close to my illustration. My simple model suggests roughly six percent of households owned a smart speaker by the close of 2015 and some 19 percent own one today and those seem to be consistent with what the analyst community is estimating.

Analyst estimates suggesting annual smart speakers sales will peak in 2019 and begin to decline are difficult to defend. My simply illustration/model certainly doesn’t support that premise. Here are some narrative arguments in support of my perspective and the simple model I present:

The smart speaker market is nascent and we aren’t close to peak adoption, nor peak sales, anytime soon.